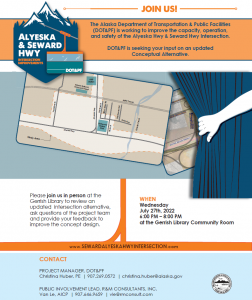 Thanks for joining us in person at the Gerrish Library on Wednesday, July 27th at 6:00 PM to review an updated intersection alternative, ask questions of the project team and provide your feedback to improve the concept design.

Did you miss the meeting? It’s not too late to review the materials and submit us your comments via email (contact us).  Please provide your input by mid-August so the project team can consider them for incorporation ahead the next milestone in the CSS process, an application and hearing before the Planning and Zoning Commission.

Check out the YouTube playlist showing fly-throughs of a 3-D Model of the Recommended Concept Level Alternative:

Field crews will be active in the project area this fall conducting wetland delineations, survey work, and collecting traffic data.  R&M survey crews will be on site in October collecting topographic data.  This work will inform the development of alternatives and the environmental document. 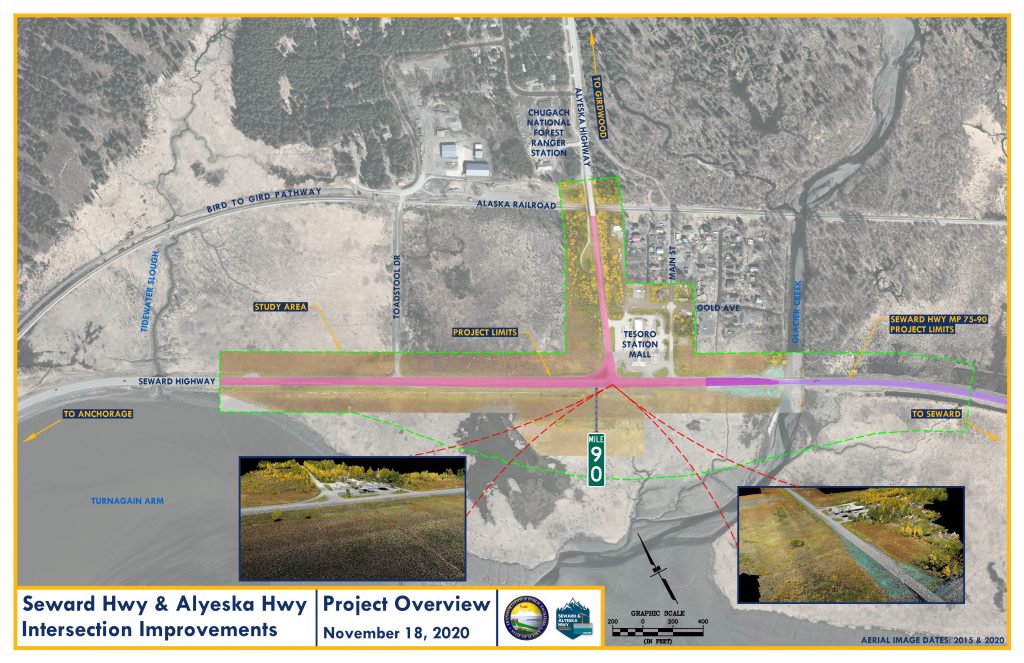 The Alyeska Hwy intersection at MP 90 of the Seward Hwy is an important node along the 125-mile scenic byway and falls within the Safety Corridor. It is the gateway into Girdwood, and offers the only major stop for fuel and groceries between Anchorage and Seward. The current intersection is an at-grade tee configuration with left and right turn lanes on the Seward Hwy and a free right for Anchorage-bound traffic coming from Alyeska Hwy. Seward Hwy traffic is characterized by extreme seasonal peaks, with July volumes almost six times that of January volumes. That reduces the number of available gaps for turning vehicles, leading to increased delay. This is exacerbated by the many access points around the Tesoro Station Mall and associated turning movements.

While the intersection itself does not experience a higher-than-expected crash rate when compared to similar intersections throughout the state, many of the crashes that have occurred involve left-turning vehicles. These crashes have the potential to be high-severity and involve the movements that experience the most delay. Alternatives that reduce the delay for left turns are likely to also improve safety for these movements.

DOT&PF has funded the project for engineering, environmental and public involvement activities through the selection of an alternative and development of the design to the 30% level, including compliance with the Municipality of Anchorage’s Context Sensitive Solutions (CSS) Policy and the National Environmental Policy Act (NEPA).

Conceptual Design Alternatives were developed and have been under public and agency review. A recommended concept alternative has been identified by the Project Team and they are gathering feedback from the public and project stakeholders beginning late June 2022 to see if it will be preferred by the community.